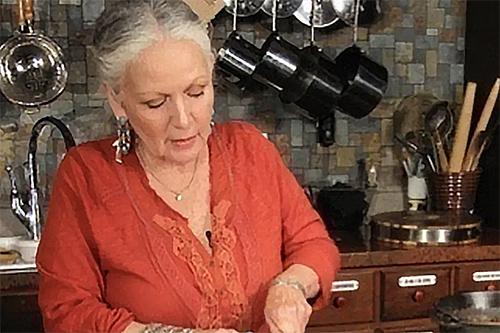 Loretta Barrett Oden was raised in Oklahoma, a state she calls a "melting pot" as it is populated by 39 federally recognized Native American tribes from all parts of North America. She grew up surrounded by cooking and often accompanied her mother, grandmothers, and aunts while they prepared traditional dishes. As an adult, she realized the potential opportunity to educate others about Native American history and culture through cuisine.

Loretta has spent the past thirty-plus years, cooking, studying, teaching and adapting recipes to preserve the culinary legacy of her upbringing. In the early 1990s, she and her son, the late chef Clayton Oden, opened the Corn Dance Cafe in Santa Fe, New Mexico, the first restaurant to showcase the bounty of food indigenous to the Americas.

She is best known in the public eye for her five-part television series, "Seasoned With Spirit: A Native Cook's Journey," by PBS. Her work has opened minds (and mouths) to the diversity within Native American culture, a history that is often overlooked by the average population. Her work in educating others and sharing her love for history through food has earned her numerous awards and honors, including an Emmy for her PBS series.