The Night World: Kyhl Austin ’18 on the Beauty of Maligned Moths (PHOTO ESSAY)

If front porch lights and mothballs are all that come to mind when you think of moths, think again. There is a whole moth world out there, order Lepidoptera, that extends far into the night beyond the small, brown, fluttering creatures familiar to most humans. 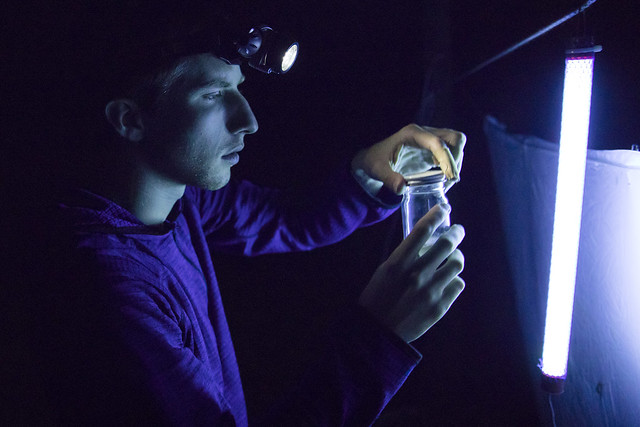 Kyhl Austin '18 discovered that world on his Tennessee back porch one summer night a decade ago. There lay a royal walnut moth, quite dead, and huge by most moth and 11-year-old-boy standards: six inches across with bright orange, yellow and brown markings. He rushed it inside and gathered his younger brothers around to examine the thing.

His little brothers eventually moved on, but Austin's fascination grew. He learned to identify moths by common name and classification. By the time he got to Davidson, moths were a full-blown passion, and taxonomy a fully-developed talent.

Biology professors made sure he had the opportunity to bring both his passion and his talent to bear on the college's 6,600-specimen insect collection. By the time he declared his biology major at the end of freshman year, Austin had already spent many hours curating, organizing, labeling (or relabeling) and digitizing data.

Senior year, that work paid off with the massive upload of data from Davidson's substantial insect collection to the Symbiota Collections of Arthropods Network (SCAN). Now, any researcher anywhere can query SCAN to determine where and when a species has been found in the past, in order to examine questions like how climate change may affect distributions of species, or how pollinator species may be declining, said Professor of Biology Chris Paradise.

"We are a small part of the database, but we wouldn't have anything there if it wasn't for Kyhl," said Paradise. "Because he's so good, I've let him do whatever he wants in my lab."

In addition to delicate dissections and painstaking classification of thousands of specimens in campus labs, Austin worked for two summers at the Mississippi Entomological Museum and has traipsed through remote Southwestern prickly pear patches for eight hours a day in search of cactus borer caterpillars, making career connections throughout the entomology world along the way. He's made many nighttime collection field trips to the Davidson College Ecological Preserve and even published on the first North American record of an introduced Asian moth, Lepidotarphius peronatella.

At Spring Convocation, Austin won the Tom Daggy Biology Award, for achievement, leadership, service and "a love of exploring the secrets of life."

These photos reveal a glimpse of the story behind some of those secrets. (To see photo captions, click to view on Flickr)