When Donna Peters ’89 talks about her years as a Davidson student, or her time as a working actor, or her experiences as a C-level corporate leader, or her entrepreneurial ventures, she highlights the “moments that matter.”

That is to say, the moments that have helped define her personal life, her career success and the ways she now helps others as an executive career coach through her company, The Me-Suite. This fall, Peters added another title to her impressive résumé: Davidson College Innovator-in-Residence through the Jay Hurt Hub for Innovation and Entrepreneurship.

Through collaborative work with students, faculty and college partners, Peters will contribute to many “moments that matter” for people at Davidson and in surrounding communities.

The Innovator-in-Residence role at the Hurt Hub is a unique opportunity for a Davidson alum who is working as an entrepreneur or innovator to grow their venture while employing Davidson students through the Gig-Hub program, teaching workshops, collaborating with Hurt Hub coworkers and providing mentorship for students and the broader Davidson community.

Peters, who has received four awards for her book Options Are Power and two awards for her podcast, The Me-Suite, will travel to campus several times throughout the year and hold additional sessions virtually.

“One of my strengths is being a maximizer,” she said. “I’m all about connecting the dots—thinking about how I can connect people with one another. To be able to do this in a community that has shaped all of my life experiences is really special.”

This opportunity came Peters’ way thanks in large part to a fellow Wildcat, and fellow entrepreneur and innovator, who enjoyed his Davidson experience some 15 years before her. Charlie Hinnant ’72 recently committed $1 million to the Hurt Hub in the interest of supporting today’s students—the creative thinkers, the ones wanting to give new venture concepts a shot.

In addition to funding Peters’ position, Hinnant’s significant support will back programs like the Gig-Hub, the Try It Fund and more.

“The Hurt Hub is really special and important for Davidson,” he said. “When I was a student, most of my classmates planned to go into medicine, law or the ministry. I think today, there are a lot of students who don’t have a clear direction on what they’re going to do, but they have really great ideas and maybe not always the money to pursue the ideas. I’m happy to be able to support that.”

Hinnant came to Davidson from a town of 300 people. He was a big fish in a small pond in his hometown and says he arrived at Davidson a little bit behind the academic curve.

“It’s an amazing story that I even graduated, really, because I wasn’t the best student in the world, and I was a little bit out of my element,” he said. “I remember freshman calculus, realizing everyone in the class already took that in high school, and I was learning it for the first time. I was a year behind everyone.”

Outside of school, he found his home at Davidson, joining Kappa Sigma fraternity and Fannie and Mable, a co-ed eating house. He played football and participated in theatre.

Hinnant worked hard, landing on  a chemistry major and pre-med, but decided later that medical school wasn’t the best path. Economics Professor Louise Nelson was not his adviser but took an interest in him—perhaps because all three of his roommates were Phi Beta Kappa and econ majors. She talked to him about getting his MBA.

“She had to explain what that really meant, and it ended up being the best advice,” Hinnant said. “Because of my chemistry background, the most interest I got after graduate school was from chemical companies, so I started there and ended up starting my own company in 1982.”

Hinnant sold that first company about five years ago but started two others in the meantime, both chemical manufacturers, and continues to run those today.

In addition to generous support of the Hurt Hub and past generosity toward the Martin Science Building, Hinnant has remained connected to alma mater as an Annual Fund class chair, reunion committee member and more.

The Stage, the C-Suite, The Me-Suite

Peters graduated from Davidson with a degree in English and a passion for theatre. She met her future husband, Jonathan Darsey ’90, at an on-campus audition. He got a part and she didn’t, but she asked him out on a date and the rest, as they say, is history. Fast forward to senior year, when Peters was headed to law school—deposit paid and all—when a mentor on campus gave her a last-minute nudge at apparently the exact right time.

“Why not give acting a real shot?”

That was a moment that mattered.

Something made Peters listen to the question. She lost her law school deposit but set out to launch what became a decade-long acting career. She then decided to get her MBA, and the next 20 years were spent in corporate America, where she became a senior partner at a large consulting firm. She was connecting dots then, too, between acting and business.

“I used my theatre experience every day, in the way you need to put yourself in other people’s shoes and tell people what they need to hear in a way they’re willing to listen,” she said. “I’m hoping to bring that sensibility to Davidson, as students think about writing business plans, pitching for funding, distilling messages, or working on personal brands and networking.”

Peters retired from her corporate career in January 2020 and decided to launch her own venture, The Me-Suite, which helps people approach their lives with more purpose, planning and power. Though she could not have imagined a global pandemic loomed, it turned out the timing for her new concept was, once again, exactly right. 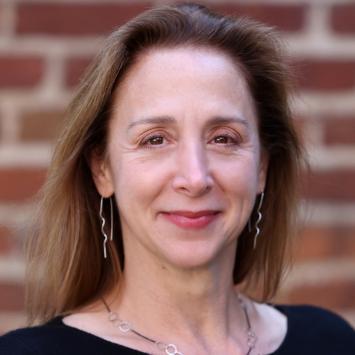 I’m all about connecting the dots—thinking about how I can connect people with one another. To be able to do this in a community that has shaped all of my life experiences is really special.

“I happen to have gotten lucky,” she said, “that this is what I wanted to be doing at a time in society when people wanted to listen. With the pandemic came an increase of people focusing on self-reflection, re-evaluation, inspiration to try something new.”

During her career, Peters was often the only woman in the room. She was also working for what she says is one of the most progressive, talent-forward companies in the world. This gave her a great deal of exposure and lessons that she carries into her work today.

“My job now is all about helping people shape the role work plays in their lives,” she explained. “For anyone who has a career, you are awake working or doing something related to work more hours in a day than you are awake not working. So, if this is true, and we all agree this is true, you have to put work to work for you. The goal is to be intentional.”

Peters’ role as Innovator-in-Residence might be her newest connection to Davidson, but she has never lost touch with the college. She sits on the Davidson Arts and Creative Engagement Board, hires several student interns every summer, has presented to students through the Matthews Center for Career Development and more.

Now, through Hinnant’s generosity and passion for Davidson’s future, Peters and the Hurt Hub will continue to inspire students as they launch intentional, purposeful lives of leadership, service and innovation.