What Students and Faculty Say 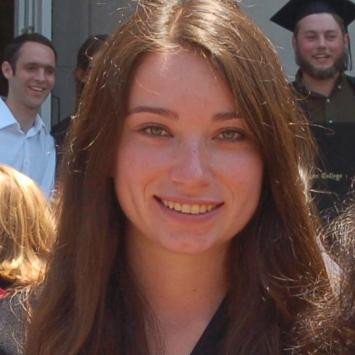 I always tell people I use my GSS major much more often than my econ minor even though I am in finance. I'm such a strong believer in liberal arts skills. They take you far and allow you to transition between very different roles. I couldn't have switched to finance from online marketing without them. I talked a lot about my writing and critical reading skills in my interviews. Plus, GSS teaches women, LGBTQ+, etc. to know what to expect in the workplace. Plus it makes people better allies. I think I am much better prepared than my fellow recent grad coworkers. A lot of it goes back to the power of naming and being comfortable identifying things that are sexist, racist, etc. Please feel free to share what I said with current students if that would be helpful!

I never realized how important things like gender studies were until I landed in a place where they exist only in embryonic form! Gender studies is a critical initiative because it persists in the belief that analysis of a culture and its artifacts are intimately related to political ends. The fact that gender studies as an interdisciplinary phenomenon is an outgrowth of feminism (both within and outside of the academy) is no secret, but the foregrounding of this ideology is an epistemological statement about the possibility of objectivity as much as anything else. This self-reflexivity is also central to gender studies in the classroom, for here we are asked to use the knowledge of the academy to examine our own lives and to use the knowledge of our own lives to examine the academy.

Does this relevance mean that  the material will (or should) be easier to digest or write about? Not necessarily. Without doubt, the most intellectually demanding work I did at Davidson revolved around issues of gender, identity, and politics, and some of the most wrenching writing experiences I lived through involved the same. What it does mean is that gender studies is a rich conversation between different types of knowledge, different aspects of life that are traditionally kept separate by the strictures of disciplinary boundaries or institutional practices. Not only did the gender studies program encourage me to look at gender and its relationship to power, identity, sexuality, etc. in a more sophisticated way, but it also (and perhaps more importantly) taught me to look always for the relationship between academic knowledge and social change, or lack of change (as is too often the case). bell hooks says that "if we are to live in a less violent and more just society," then we must educate ourselves and others to be "critically aware and socially active" (Yearning, South End Press, 1990, 63).

Similarly, the Davidson mission statement says that the college's goal  is to "liberate the minds of young men and women for useful lives of leadership and service." If this is the proper end of education, and I believe that it is, then the Gender Studies program and others like it are not marginal, but central, to the task at hand.

Gender studies are no longer theory in my life. They are no longer a set of ideas worth arguing about and dissecting late into the night. They are not a topic for letters to the editor, nor are they anything I express explicitly. Instead, gender studies have become the backbone of my actions, the lens through which I filter my daily life. Being a walking, breathing example of a feminist-principled life is my goal. The little bow-tied Presbyterian man who lives in my head says I'll never meet that goal sufficiently, but he also obliges me to try.

What does that mean on a practical level? Out of the academic environment, feminist studies atrophy unless practiced. My husband Peter and I apply them every day in our marriage. I am lucky, very lucky, to be married to a pro-feminist man. That doesn't mean he is content to place his goals behind mine. It doesn't mean he wants to be a househusband, or even that he cleans the bathroom. It means he doesn't take for granted the decisions that constitute marriage. He negotiates. We negotiate our lives so we can find balance, fairness, a just place. I clean the bathroom, he cleans the kitchen; we sell my car so we have no choice but to commute together in his, giving us forty minutes of uninterrupted conversation each day; I live with him in North Carolina, thousands of miles from my California home, because he has grandparents in Durham. Nothing negotiated is permanent. As situations change, so will we. It is more work to structure our marriage on negotiation, but the flexibility it provides is a goal we share. That was negotiated, too. So will be parenthood, job changes, housing moves and everything else.

We try to bring the spirit of partnership into our work lives and our communities of shared activity. At the office, we're both acutely aware of  how many people lack any theoretical framework on which to hang their lives or choose frameworks that directly conflict with our own. When we first entered the work world we found ourselves surrounded by folks who defined success by salary and believed a beautiful house reflects a beautiful soul. Each of us worked to find work in a place where we could live our pro-feminist values openly and enthusiastically. Over the course of a few years, we both succeeded—in the for-profit business sector, no less.

None of the quiet practice of feminism precludes its declaration; recently, Peter was interviewed for a North Carolina public radio talk show, "The State of Things," on what it means to be a man. He snuck many feminist-inspired statements into the broadcast. Last summer, I found myself at the state Junior Chamber of Commerce speech competition after winning local and regional competitions with a speech that directly criticized the sexism of the organization. But these public expressions of our private beliefs aren't the focus of our energy, simply another way to live the values we learned to articulate in gender studies courses.

When I was still at Davidson I couldn't fathom how different life would be after graduation. Nothing stayed the same. Major worries disappeared, only to be replaced with new demands. Intense friendships, based on hours and hours of conversation, were suddenly lifetime propositions, not possible to build in a semester JYA. On the flip side, I constantly meet people who never entered my college-limited radar. I learn from them, become inspired by them, and hope dearly that the regard and respect are reciprocated.

I love life now. It is a new challenge. It is simultaneously smaller in  scope (after all, we no longer spend hours in class wrestling with abstract  ideas and concepts) and more consistent (I know where I'll be at most any time during the week). Peter's and my interest in gender studies has expanded into related issues, especially death and dying. But underlying our lives today is a solid education in theory, the vocabulary for intelligent self-appraisal, and a model for right living inspired by the feminist movement. Gender studies didn't provide any ready answers, but they did provide something much more important: an excellent tool for finding the answers ourselves.

Gender studies has enhanced my teaching enormously by enabling me to offer an upper level interdisciplinary course, which in turn brings a variety of students (all different majors) together. We have a common interest but diverse perspectives, so we have much to learn from each other. It's invigorating and refreshing.

Impertinent questions. New discoveries. Creative, challenging conversations with adventurous-minded, socially awake women and men. Gender Studies suggests those opportunities to me. I know that some students view the Gender Studies Concentration as a closet Women's Studies program, but it is not. The Gender Studies Concentration includes a focus on women, as many of the course selections each semester suggest. It also, however, includes a focus on men, and on women and men interacting with each other, from birth to death, in all sorts of combinations and circumstances, public and private, individual and institutional. Gender Studies names a larger category than Women's Studies; it covers broader territory, and it asks different questions.

Gender Studies begins with the assertion that gender is a social construct, that humans are taught from the moment of birth(and some might argue even before) what their society believes is man, male, masculine  and woman, female, feminine. Gender Studies rejects the assumption that a person's biological sex naturally or innately contains all the essential matter of male  or female  identity. If biological sex alone does not determine gender, then what does? Answering that question leads to an investigation not only of biology but of culture and its institutions as well. Fully exploring the creation of gender, that long unacknowledged reality, and understanding gender's effect upon all dimensions of life involves interdisciplinary work.

In 1989 and 1990, when faculty were developing concentrations that would allow students official recognition for interdisciplinary work, some faculty members thought Davidson should, following a model from many of our peer institutions, offer a Women's Studies program. Others, however, argued that Gender Studies would better reflect the college's history and prepare current students for the future. The debate over which type of program to offer was more pragmatic than passionate and occurred before any proposal was made to the faculty; when the concentration was proposed, the faculty approved it without opposition.

Liz Yarema, a 1991 Cum Laude English major,  was the first person to graduate with a Gender Studies concentration. Since then, forty-two people have completed the five-course requirement for the concentration. In addition to English, their majors include Anthropology, Biology, French, History, Political Science, Psychology, Religion, Sociology, and Theater; two students have interdisciplinary majors through the Center. Many of the concentrators graduated with honors or high honors in their majors and were inducted into Phi Beta Kappa. Several have completed graduate school; others are employed by business or non profit organizations. Rafael A. H. Candelario, a History major who taught at Durham Academy, is now a marine officer.